I would argue that it’s difficult to make French Toast any better than it already it is – that is until I added bacon and eggs to it. I’m sure you’re thinking that this must be a calorie bomb but it’s not when you make it my way!

By choosing healthier options and eliminating the amount of unnecessary butter used to cook it, it’s a treat that you could eat every day if you wanted to. Try it for breakfast, lunch, or dinner. Enjoy!

• Coat a small skillet with non-stick cooking spray and place over medium-high heat. Add bacon slices and cook for about 5 minutes, or until crispy.

• While the bacon is cooking, whisk together 3 egg whites, almond milk, cinnamon, and salt in a small mixing bowl. Set aside.

• Remove bacon from pan and place on a paper towel.

• Reduce heat to medium, and in this same skillet add the remaining 4 egg whites and let cook to get firm.

• While the egg whites are cooking, make your French Toast. Dip one slice of the light bread into the egg-milk mixture until fully saturated. Place on the skillet. Repeat with the other slice. Cook for approximately 3-4 minutes, or until underside is golden brown. Flip over each slice with a spatula.

• Once the egg whites are firm, add the cheese slice and crumble the bacon over the top. Let sit for a minute or two and then flip over omelet style.

• Once the French Toast is cooked to your desired golden brown on both sides, remove and put on a plate. Put the omelet on one of the slices and then top with the other slice to form a sandwich. OPTION: you can substitute the bacon with Canadian bacon or ham.Enjoy!

SERVING SUGGESTIONS (not included in macros below)
• Sprinkle with a dash of nPower Nutrition Isolate Vanilla Cupcake protein powder for a powdered sugar like effect
• Top with your favorite sugar free syrup
• Top with your fresh fruit, such as strawberry slices 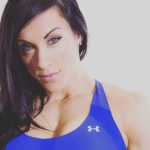 Allison is a five-time IFBB Figure Olympian who has a passion for healthy, yet delicious cooking. Allison owns Alli’s Slim Pickins, Inc., a healthy food and recipe-based company. She is excited to share her years of experience with you and provide healthy recipes that proclaim her slogan: 100% Taste & 0% Guilt.