Most of you may use the words training, exercise and working out interchangeably. I tend to do this too, but I’ve also learned over the years that the term training does not only encompass working out or exercising, but actually involves re-training both your body and your mind. Training is just as much – if not more – a mental workout as it is a physical one.

This includes your approach to both exercise and nutrition. If you keep thinking the same way you’ve always thought when approaching food and exercise, you may always be struggling to embrace the fit lifestyle.   You have to re-wire your thinking. Learn how to re-associate things you may have once thought, or still think of, as unappealing (perhaps broccoli, plain, non-fat Greek yogurt, Bulgarian split squats, and burpees). 😁

Most of us by now have heard of Pavlov’s classical conditioning. If you haven’t or need a refresher, Ivan Pavlov (1849-1936) was a Russian scientist interested in studying how digestion works in mammals. As part of his work, Pavlov began to study what triggers dogs to salivate, which should have been, in theory, a simple study: mammals produce saliva to help them break down food, so the dogs should have simply began drooling when presented with food. But Pavlov noticed that drooling had a much more intricate psychological effect, which paved the way for a new theory about behavior that could be applied to humans. 🐶

Pavlov’s dogs were fed by people who wore lab coats. Pavlov noticed that the dogs began to drool whenever they saw lab coats, even if there was no food in sight. Pavlov wondered why the dogs salivated at lab coats, and not just at food. He then conducted a study in which he rang a bell every time he fed the dogs. Pretty soon, just ringing a bell made the dogs salivate. This initially showed that dogs learn by association, which was later applied to human psychology.

No, I’m not talking about conditioning your hair 😉. Taking the principals of classical conditioning a step further, self-conditioning is a way for you to change your habits by connecting healthy foods and exercise with positive associations instead of negative ones.

2. Positive Association Once you’ve identified what you want to change, you have to figure out how you can re-wire your programming. Chances are, if you dread doing it, you won’t do it. So the first thing you have to do is change the negative association to a positive one. 👍 What if Pavlov’s dogs were being given shots by people in white lab coats instead of food? They would associate the white lab coats with something bad instead of something they wanted. So start associating healthy food choices and exercise with the positive feeling of accomplishment, or other non-scale victories.

3. Reinforce Positive Behavior Just as if you were training a dog, or raising a child, you need to reinforce your own positive behavior with some kind of reward. Keep giving yourself positive affirmation, or incentives to keep moving in the right direction. Pretty soon, you won’t ever realize how much your habits and lifestyle have changed! ✌️

Changing your own perspective on healthy eating and exercise can feel like mental warfare. Without a solid plan of attack on how to conquer your enemies, you will constantly struggle to overcome obstacle after obstacle. Try a different approach and re-train yourself to truly embrace a healthy, fit lifestyle so that you can look forward to your weight-training and cardio sessions (most of the time, anyway) and savor every morsel of healthy food. 😍 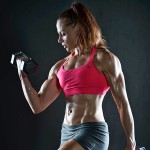